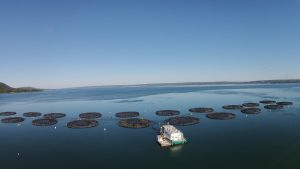 The ARB hearing process was thorough and rigorous, and included input from multiple stakeholders. We are pleased with the outcome of this application and look forward to engaging with this process for the other applications we have before the ARB.

Kelly Cove has operated on this lease since 2004, and the site has been an active aquaculture operation since 1994. Our application was to bring all moorings and equipment within the lease boundary, with no changes in equipment, location or production increases.

The Board concluded that the boundary amendment would have no negative impact upon the factors which it was required to consider.

Our goal is to lead global salmon farming science innovations and sustainable best practices. Our relationship with the marine environment is vital to our business and to producing top quality seafood for our customers. As a family-owned company, we aim to continue to farm with care – to ensure long term social, economic, and environmental sustainability. Our salmon farm sites are routinely audited and certified by third party organizations, in addition to inspections by regulators.

The company has been sustainability operating Atlantic salmon farms for over twenty-three years in Nova Scotia and we are proud to employ 205 full time year-round Nova Scotians and support another 240 jobs through spending $51.5 million on goods and services annually from 309 local suppliers.  Our provincial salmon farming generates annual taxation of $7.4 million and consumer spending of $13.7 million. This generates much needed revenues for rural municipalities, and provincial and federal governments to be spent on social programs, healthcare, education, roads, and other services.