LIVERPOOL, NS – April 30, 2020 – Kelly Cove Salmon Ltd. is pleased that the Nova Scotia Department of Fisheries and Aquaculture (NSDFA) has approved the renewal of its marine aquaculture licence and lease in Liverpool Bay.

The renewal procedure included the completion of a performance review based on the technical and biological assessment of the farm and a public comment period. In its decision, the Department concluded that claims being made by individuals about impacts to the local tourism industry and lobster populations were unproven.

“We are pleased that the Coffin Island site lease in Liverpool Bay has been renewed by government regulators which recognizes our strong environmental performance and best management practices,” said Joel Richardson, Vice President of Public Relations for Cooke Aquaculture. “These approvals confirm that the claims individuals are spreading are fiction.”

Data from Nova Scotia Tourism shows that on the South Shore, where fish farming has taken place for many years, there was consistent increases in hotel room sales and tourist visits from 2010 to 2017.  According to the Bedford Institute of Oceanography, lobster stocks have been at an all-time high over the last five or six years, including Liverpool Bay in Lobster Fishing Area 33 where they have huge landings.

“More than twelve different provincial and federal regulatory agencies have oversight on our operations, and we adhere to the Nova Scotia Environmental Monitoring Program Framework. Maintaining a clean environment is essential to raising salmon, and the coastal area around the Liverpool Bay site is as pristine today as it was when the farm was first established in 2000,” added Richardson.

Cooke directly employs 205 people in Nova Scotia and their operations support an extra 240 indirect jobs. The company has produced healthy, sustainably farmed Atlantic salmon for local grocery stores, restaurants and the hospitality sector for over twenty-two years across twelve marine aquaculture sites along Nova Scotia’s Southern and Western shores. Cooke also operates a feed mill in Truro and a seafood distribution centre in Dartmouth and is one of the largest users of the Digby-Saint John ferry with 360 Bay of Fundy crossings in 2019. 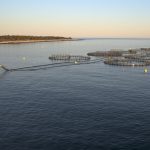