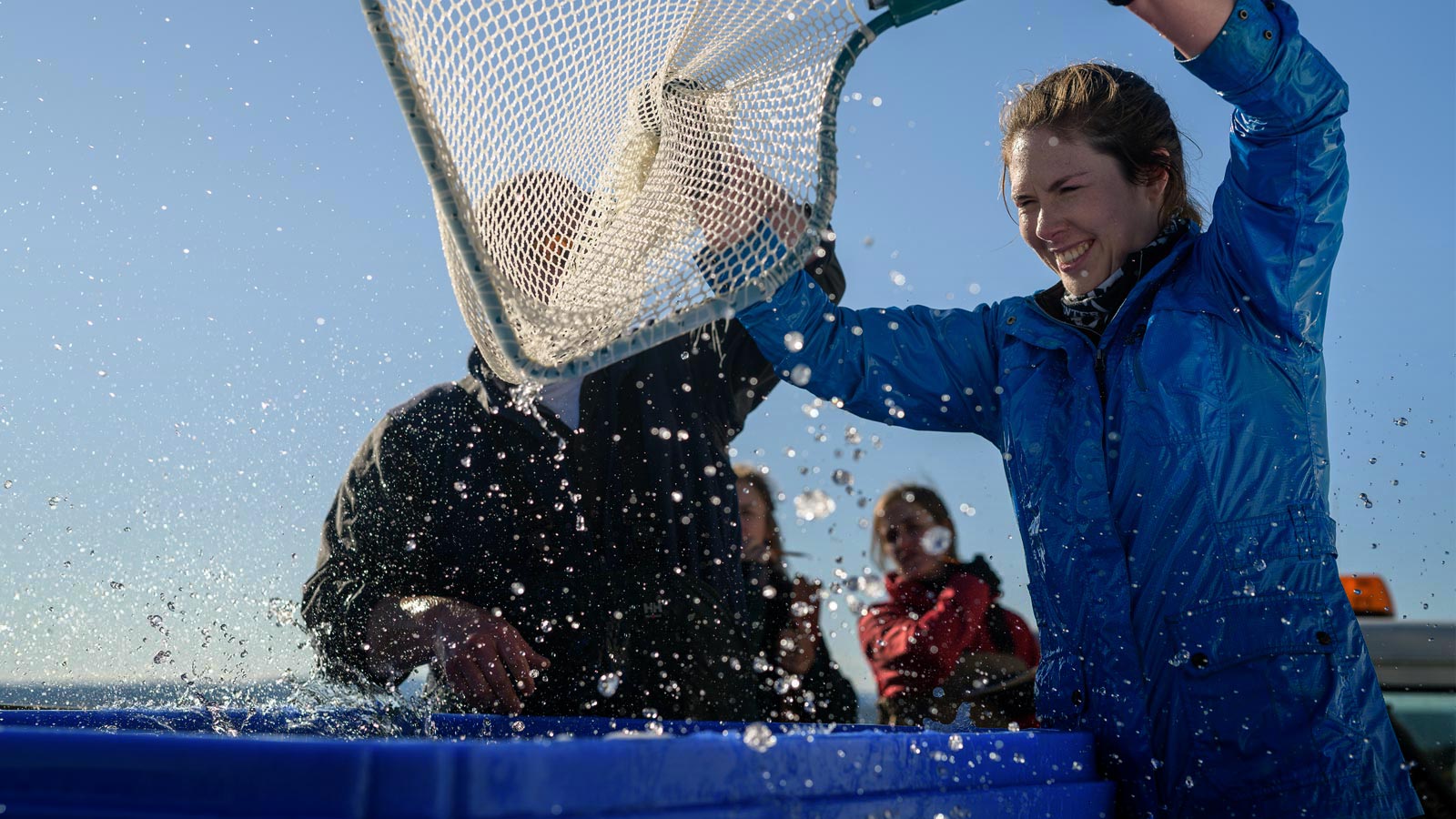 Project partners and community members gathered in the national park to celebrate the homecoming of these Atlantic salmon and the on-going conservation work which this year marked the return of over 70 salmon to the national park. This is a 29-year-high in salmon returns to the Upper Salmon River, higher than most rivers of inner Bay of Fundy population.

The fish released today had been collected from the Upper Salmon River as juveniles and grown to maturity in the ocean environment on the world’s first wild Atlantic Salmon Marine Conservation Site in Dark Harbour, managed by Cooke Aquaculture. Research has shown that salmon with the most exposure to wild conditions have a better chance of survival than fish that spend more time in captivity. Fort Folly First Nation is leading recovery efforts on the Petitcodiac River system; today’s release in Fundy National Park follows the release of 128 wild salmon into the Petitcodiac River by Fort Folly Habitat Recovery earlier this month. Scientists are already seeing positive results in these rivers because of this innovative approach.

Monitoring shows that multiple age classes of wild-hatched juvenile salmon are once again present throughout the Upper Salmon River and Petitcodiac River. Research by University of New Brunswick scientist, Dr. Kurt Samways, shows that river ecosystem productivity has significantly improved due to marine nutrients attributed to the presence of high numbers of adult salmon. This research suggests that this increased productivity translates to improved feeding and survival conditions for juvenile salmon that would not exist without the nutrient input.

Through its collaborative recovery model, Fundy Salmon Recovery is looking to change the fate for Atlantic salmon in the inner Bay of Fundy and to provide a model that will aid conservation efforts around the world. Collaborating partners in Fundy Salmon Recovery are Parks Canada, Cooke Aquaculture, Atlantic Canada Fish Farmers Association, Fort Folly First Nation, the Province of New Brunswick, Fisheries and Oceans Canada, the University of New Brunswick, the Atlantic Salmon Law Enforcement Coalition and the Village of Grand Manan.

This year’s historic iBoF salmon returns are an excellent start to 2019’s International Year of the Salmon; Fundy Salmon Recovery looks forward to celebrating the iconic Atlantic Salmon with special events in 2019, including an adult fish release event at Fort Folly First Nation next fall.

“We are pleased to be a partner in Fundy Salmon Recovery and leading this work on the Petitcodiac River, a river that was, and still is, so important to the salmon, the Bay and my community. I am looking forward to the future of this project, and hold this work up as an example of meaningful collaboration between the federal government & First Nations people and an opportunity for reconciliation.”

“Wild Atlantic salmon are incredibly important to our region, to our environment, to our people and our culture. The success of the Fundy Salmon Recovery collaboration is an ideal model for action oriented, science-based conservation efforts to save our Atlantic salmon in other New Brunswick rivers like the Miramichi. Seeing the fish return to their native waters is a tremendous achievement that we are all proud of.”

“The University of New Brunswick prides itself on its quality academic programs and being a leader in innovative research. Being a part of Fundy Salmon Recovery has the power to develop leading conservation experts and the next generation of biologists, ecologists and conservationists, while providing the opportunity to change the outcome for this critically endangered species.”

“The Government of Canada is very proud to actively work with its many partners to monitor and restore ecosystems, protect species at risk, and expand our knowledge of biodiversity and climate change. Parks Canada’s role as a key partner with the Fundy Salmon Recovery team and the team’s winning efforts to protect the inner Bay of Fundy Atlantic salmon in Fundy National Park and its surrounding ecosystems demonstrates the Government of Canada’s ongoing commitment to conservation.”